ARCADIA SHERPA XL (the successor of SHERPA) is another step in the growth process of ARCADIA philosophy, giving life to a new line of yachts next to the historical A line. The spaces inside the new SHERPA XL efficiently use every inch of the vessel’s 24-metre overall length and (especially) the approx. 7-metre beam, which is greater than the average 6.4 metre beam of yachts in the 85-90 feet category available on the market. This means that the overall living area is 220 square metres inside and outside thanks to the side garage solution. The concept of the SHERPA XL, developed with the Milan-based Hot Lab design studio (which had previously worked with ARCADIA YACHTS on the interiors of the A105) develops around the arrangement of the decks. The bow decks are staggered, so there is one central staircase with reduced height differences. This unusual layout has permitted to achieve large spaces in a limited height, arranging volumes in unusual ways.

Based in Naples, Italy, Arcadia Yachts is dedicated to combining innovation, ethics and environmentalism in its approach to building semi-custom luxury composite yachts.

In 2008, a group of yachting industry executives following an “Ecological Dream” founded Arcadia Yachts, naming the shipyard for a mythological place where humans can live in harmony with the spirit of nature around them.

The shipyard’s first luxury yacht launch, the 25.9-metre Arcadia 85 Solar (now called Good Life), which launched in 2010, embodied that philosophy. Her exterior design, created by Francesco Guida, incorporate numerous solar panels that help to recharge the yacht’s house batteries. She also features hybrid diesel/electric power, and is capable of running on electric propulsion alone in total silence at up to 8 knots.

Following the launch of the Arcadia 85, the shipyard delivered the first Arcadia 115, the 35-metre M’Ocean, in 2012. Like her smaller sister, the 115 also has futuristic exterior styling by Guida that blends an array of solar panels into her topsides. Francesco Guide Design also gave the yacht’s interior its elegant, contemporary styling.

Arcadia Yachts builds semi-custom luxury yachts in GRP with a focus on minimising each vessel’s environmental footprint. The shipyard offers plans for superyacht models ranging up to 54.86 metres. 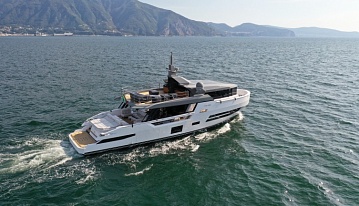